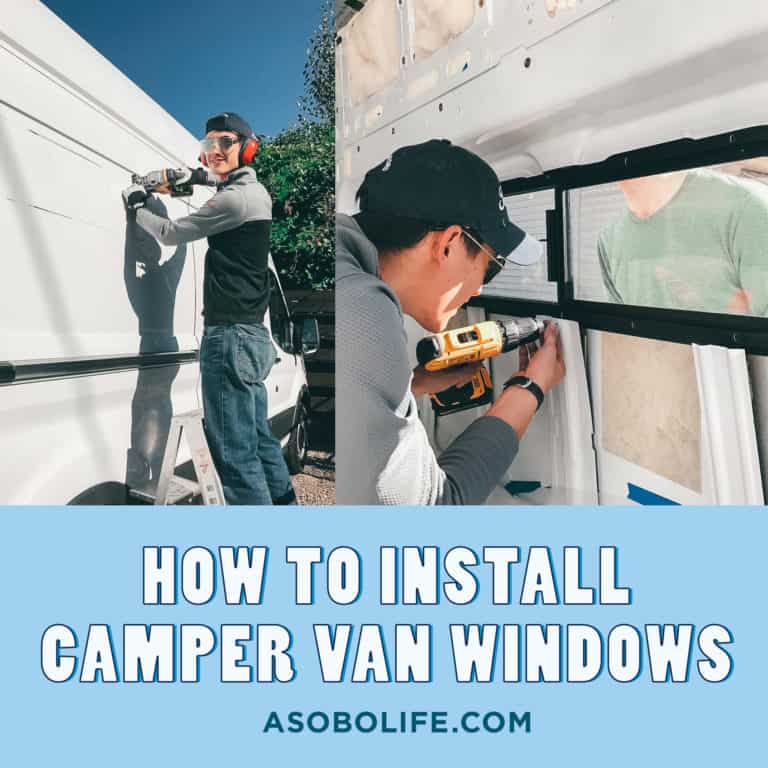 After putting in a vent fan on your roof, deciding to install camper van windows is one of the best decisions you can make to improve the livability in your van. To us, the benefits of putting in RV windows are clear and obvious:

In this post, we will go over WHY adding windows is important during your van build, WHICH camper van windows we believe are best, and HOW we installed our two RV windows in the back of our van.

Did You Know? This post is Part 2 of our 7-part camper van 'foundation' series. Check below to view the entire series. Or...simply return to our camper van build guide. 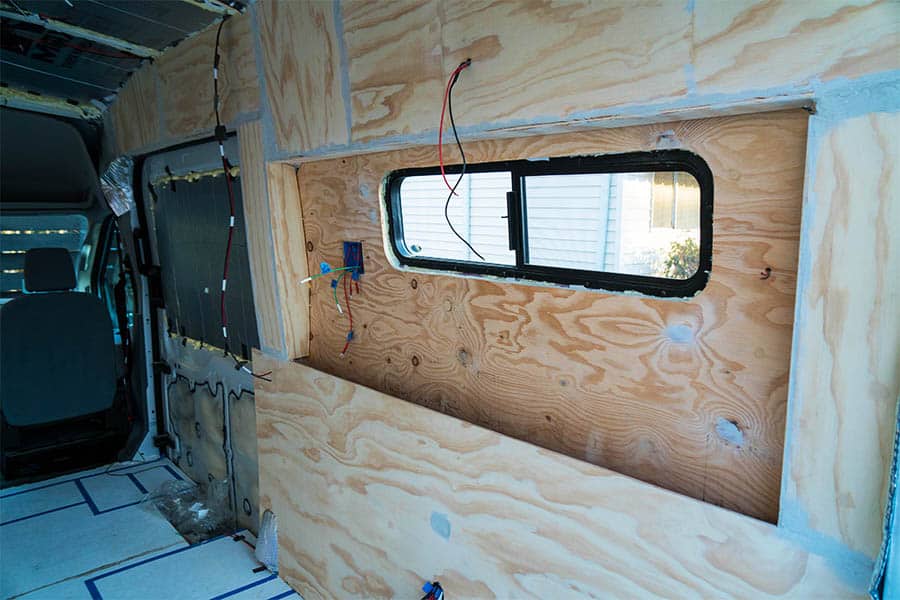 When we first purchased our new Ford Transit, we knew right away that we would install windows in our van. The benefits clearly outweighed any downsides.

Brings Fresh Air Into Your Van

Though just a window alone is nice to bring in fresh air, pairing a window with a vent fan really helps to have strong air circulation all throughout you van. Pulling fresh air into your vehicle instantly increases your van’s livability, especially during hot, muggy, and rainy days.

Read: How To Install A Vent Fan In A DIY Van

Even though our camper van windows are small, they still let in lots of sun light to brighten up our tiny interior space. Compared to lights, natural sun light is better at brightening up your space and better for your mental health. Who wants to live in a dark coffin of a van?!

View The Beautiful Outside World!

Your camper van can take you to lots of beautiful places and environments in this world. Windows help you to view this these stunning locations from inside your van.

Side benefit: installing RV windows also helps you to peak outside at night to make sure everything is safe.

Installing camper van windows dramatically changes the interior feel of your vehicle. By letting in outside light and being able to peer outside, your van’s interior instantly feels bigger and more spacious. This reduces claustrophobia and tension.

Just like with installing our vent fan, we are very aware that installing a camper van windows significantly reduces our vehicle’s stealth factor. In fact, RV windows probably do more to reduce a vehicle’s ‘stealthiness’ than a fan.

BUT, while we do like to travel under-the-radar and not draw serious attention to ourselves, we strongly believe that forgoing any window installation to become a 100% stealth campervan is a terrible idea.

Which Camper Van Windows Are Best To Install?

Deciding to install windows in your camper van is one thing, but deciding WHERE to install, HOW MANY and WHAT SIZE windows to install is not so straight forward. And the ‘right’ answer really depends on what you want.

At first, we wanted big RV windows on both sides of our van, which would allow lots of sunlight to pass through. Though this sounded great on paper, but large windows had several large drawbacks.

2. Lack of Privacy: Big windows also makes it easier for curious eyes to peer inside.

In the end, we settled on these “half sliders” from Motion Windows. They’re small, somewhat inconspicuous, but still let in lots of light.

We wanted some symmetry in our van build, so we wanted two half-slider windows. One on either side of our camper van.

It was important for us to install our windows in the back of our van, which was where we planned to build our living space and bed. We didn’t need any of the windows in the front by the kitchen or on the sliding door.

We also thought about installing windows on the back doors of our van, but because we planned to open these swing doors when we were parked, it seemed a waste to install windows on these doors.

Unlike our vent fan, installing our RV windows was quite a bit trickier. Cutting sheet metal on a vertical wall, as opposed to a horizontal surface, proved a challenging, but doable.

As usual, take it slow, measure twice (& cut once), and think ahead. Being slow and methodical when putting in your window will greatly increase the quality of your installation and reduce mistakes.

1. Outline Your Cut With A Template

In order to begin installing camper van windows in our van, we needed to make a cut out.

To make the correct size cut-out, we traced the window flange on a piece of cardboard to create a tracing template.

We then used a black marker to trace around the template exactly where we wanted our windows.

The tracing process was tricky because it was difficult to trace perfectly level lines.

But finally, after we finished tracing the template on the van, we were ready to start cutting…

2. Cut Out Any Interior Supporting Beams

Before we could begin cutting away the sheet metal, we used a Dremel (angle grinders work too) to cut away the panel’s support beams.

These support beams are thicker pieces of metal and our jig saw would not be able to saw through this.

In our case, we had to cut away three support beams, which you can see in attached picture.

With the interior supporting ribs out of the way, we could begin cutting away the sheet metal with our jigsaw.

This was a good deal more difficult than cutting through the roof when installing our vent fan because we were using the jigsaw on a vertical surface.

Tip: Press the jigsaw firmly against the van’s frame, keep the blade saw moving at maximum speed, and move the jigsaw slowly along your cut lines. Before we installed our RV windows, we prepped the cut out by smoothing out the edges with a metal file (or an angle grinder, in this case) and painted the edges with Rust-o-Leum anti-rust paint.

6. Screw The RV Window In

With the window hole prepared, we were ready to begin installing the window in our van.

Our RV windows came with water proof seal tape, which we applied on the outside part of the window’s flange. We then hoisted the window into the hole.

With the window firmly in it’s place, we took a drill and screwed the window to the van’s sheet metal frame.

Still Confused How To Install Camper Van Windows? What This HELPFUL Video! When all was finished, we had two small sliding windows installed on the rear left and right sides of our van. Not as easy of an installation process as the ventilation fan, but with the windows behind us, we were ready to begin converting the interior of the van.

…but after 2+ years on the road, we love our windows and would not have done anything different if we had a second chance at a van build. We love the amount of natural light that these RV windows allow in and, in conjunction with our vent fan, really allow a lot of fresh outside air into our van.

If you have any questions on how to install a RV window in your DIY van, please let us know in the comments below and we’ll get back to you as soon as we can!

Did You Know? This post is Part 2 of our 7-part camper van 'foundation' series. Check below to view the entire series. Or...simply return to our camper van build guide. How To Build & Install Furring Strips In A Camper Van How To Build Strong Plywood Walls In A Camper Van How To Install A Cedar Plank Ceiling In A Camper Van SumoSprings Review For RVs: We Tried Them! Are They Worth It? Traveling & exploring in our camper van is our passion and we love sharing our experiences with our readers. We hope you enjoyed reading.

If you have any comments, questions, or suggestions, feel free to comment below or contact us through email.